Kyozon is the new venture of the Tom Nacos group. It is in the same family as Weinstein&Gavino's, Le Newtown, L'Atelier d'Argentine, and Decca 77. Kyozon is dubbed as a neo-Asian bar/restaurant. You will find bits and pieces of Asia in their menu - pork belly steamed bun, pad thai, tempura prawns, siu mai, etc. On the second floor, sushi are served on a rotating conveyor belt known as kaiten-zushi. The coloured plates indicate the cost of the sushi which ranges from $2 to $7.

I have been to Kyozon twice and got to experience both the Kaiten and dine-in menu. I had the Kaiten at their opening event. First of, the essential component of a sushi is the rice. It seems there is a bit of inconsistency in the flavouring of the rice. Some had the right amount of vinegar, some just lacks vinegar making it dry. Apart from the rice, the choice of fillings are unconventional and delicious. And the tuna and salmon were fresh. What I like the most was some of the blue plates had the sushi wrapped in miso/sesame paper which had a pleasant and delicate texture. 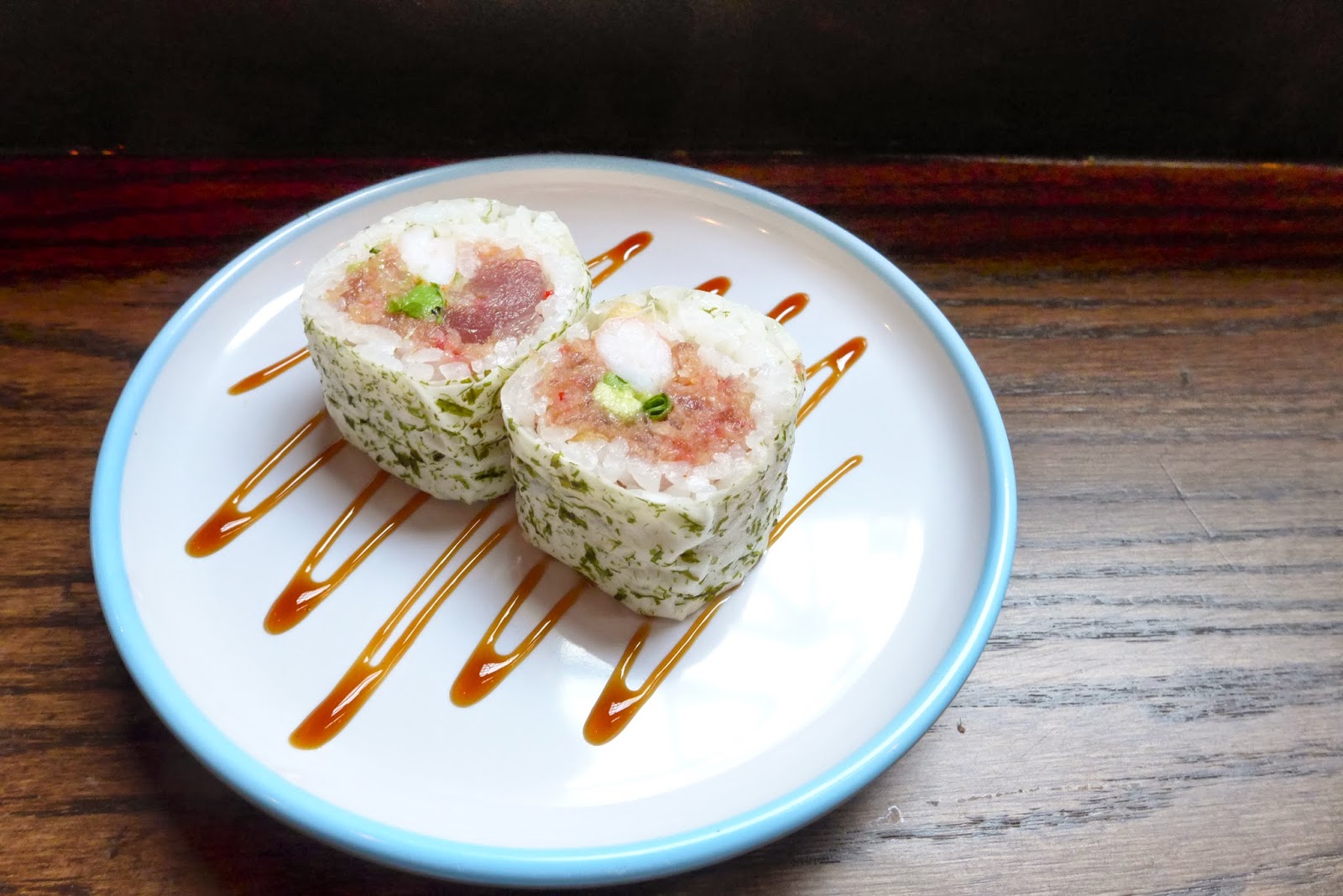 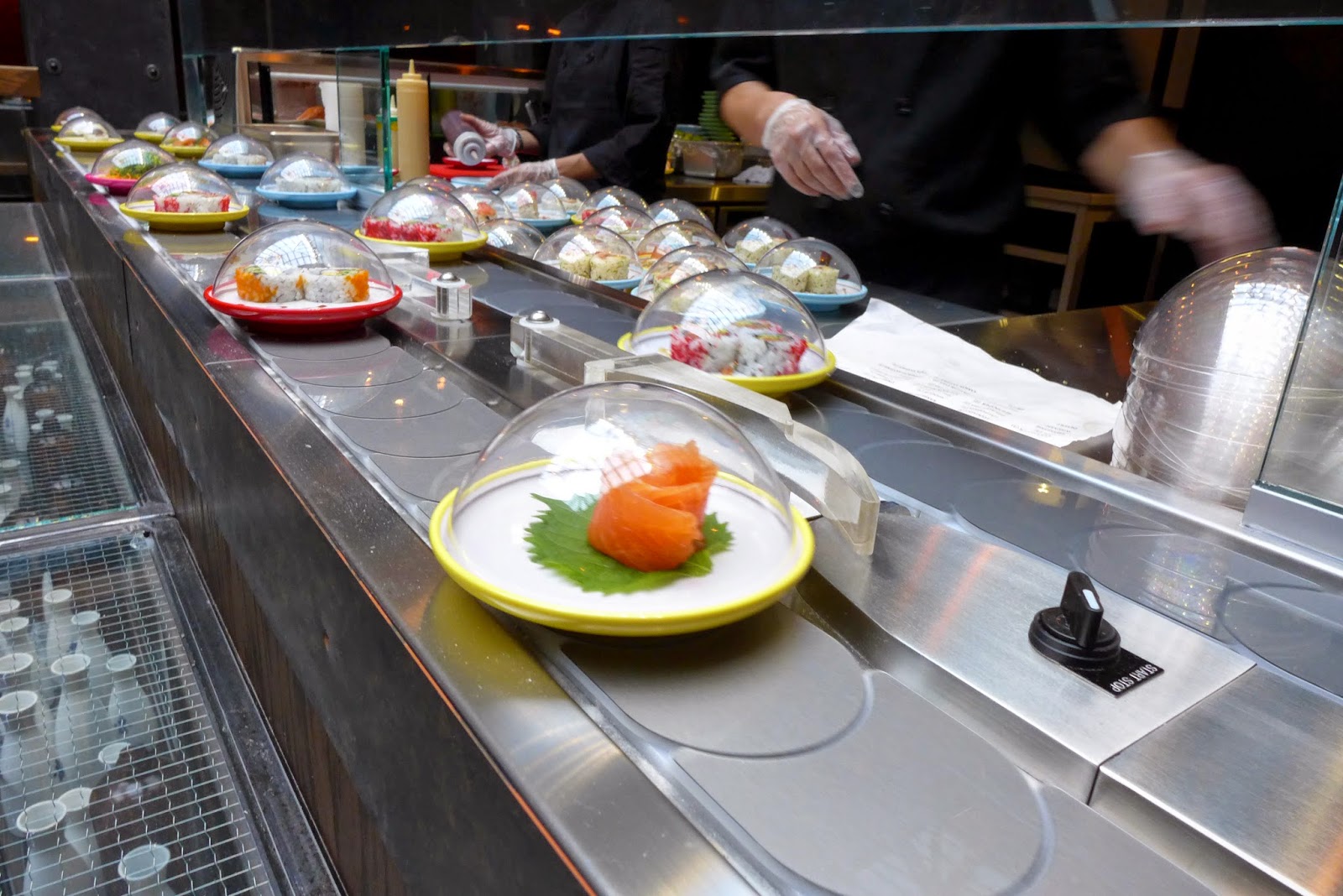 On our second visit, we went to Kyozon for dinner and ordered from the dine-in menu. We started our meal with some sushi rolls. We had the lobster roll which consists of chunks of lobster, shrimp tempura, avocado, king mushroom topped with a tuna tataki. Interesting play on texture with the crisp tempura, tender lobster and creamy avocado. The tuna gives an additional freshness to the overall sushi. I didn't realize that the tuna was a tataki until I re-read the menu. So, is it worth the extra effort searing the tuna?

We also had their signature Kyozon roll. It is filled with seafood goodness (cooked scallops, shrimp, crab stick and tobiko) wrapped in a delicate sesame miso paper. Definitely our favorite sushi of the night. We next ordered the chef selection - a deep fried sushi stuffed with avocado, snow crab meat wrapped in a soy green wrapper and topped with a salmon tartare - fresh and delightful.

We moved to another section of the menu and ordered sashimi - hamachi tuna and sake salmon. Beautifully presented and both fish tasted fresh. We next opted for some sides. We had the snake beans that were properly blanched and nicely crisp, coated with an XO sauce. This dish feels that it needs an extra element like minced pork or something crunchy like toasted peanuts. We then ordered the agedashi tofu coated with a nicely crisp panko crust, elevated with umami flavour of nori seasoning and soy sauce. We also had the sumo chips which are essentially thick slices of fried potatoes sprinkled with nori seasoning. But the flavour profile is nearly identical to the agedashi tofu.

We next ordered the black cod with a miso-based sauce and king mushrooms.  The fish was most and flaky, one of the best cooked fish that I ate in Montreal. The wheel of rice sprinkled with black sesame helps cut down the saltiness of the miso sauce and the well-caramelized mushrooms.

We finished our meal with two desserts - passion fruit panna cotta and litchi-champagne granita. The panna cotta lacks on presentation as we can only see the passion fruit seeds. Eating the seeds can be an unpleasant experience for many people (same goes for pomegranate). The best solution is to present the dessert in a verrine and extract the juice from the passion fruit would make it enjoyable to eat. At least, the panna cotta itself is smooth and silky. The second dessert comes in a marguerita glass in which the waiter pours champagne all over the litchi granita. This is served with a soft and crumbly matcha cookie - a refreshing and palate-cleansing dessert to end the meal.

Being to Kyozon twice, it feels that it is better value to order sushi from the menu than from the Kaiten, the $7 sushi (blue plates) is quite pricey considering the given quantity. Overall, the dine-in menu has many flavorful and interesting dishes. The prices are quite reasonable. The restaurant/bar is still in its infant stage, it still needs to fine-tune some dishes and the quantity of sushi in the Kaiten.