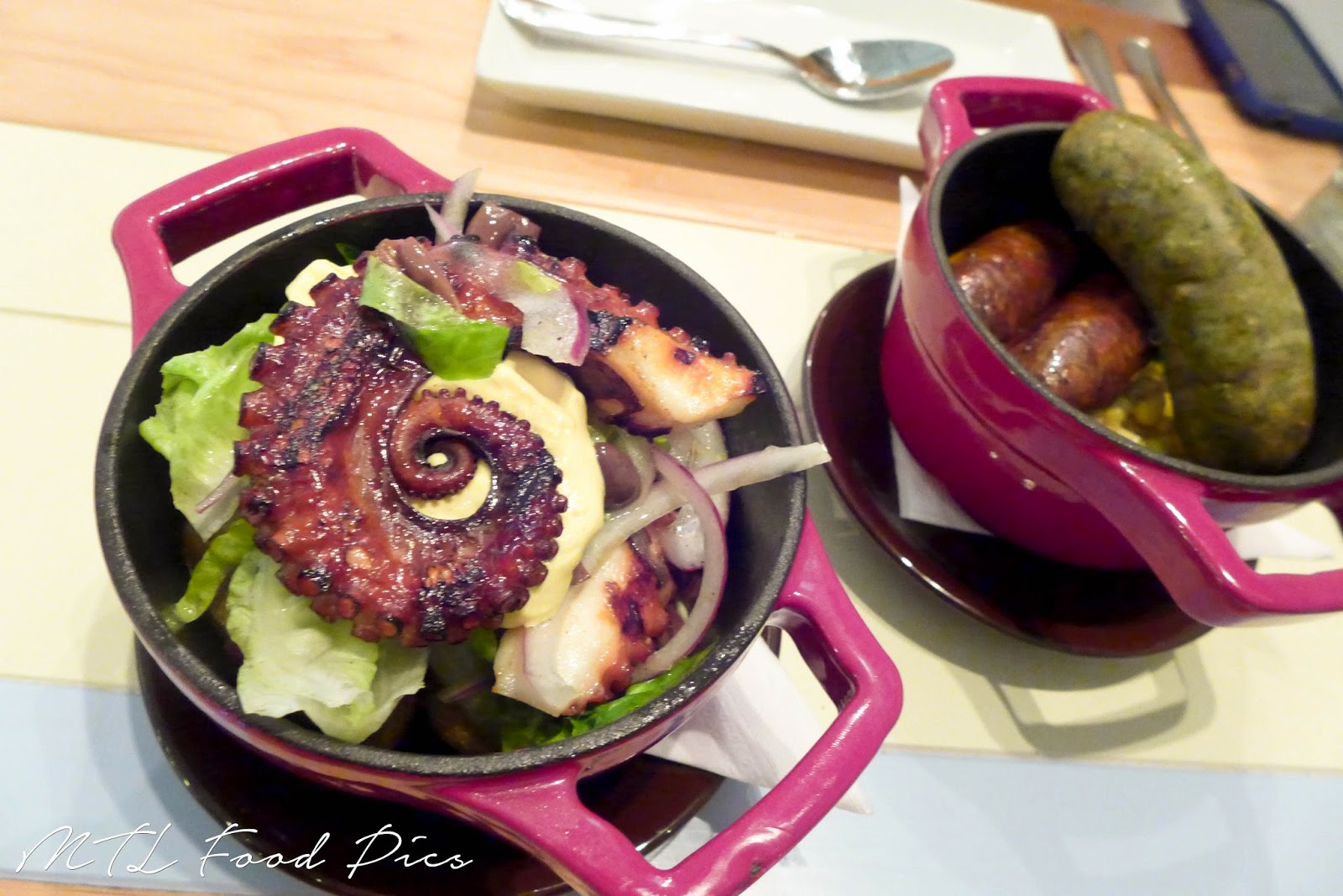 Chef Antonio Park has won the hearts of many foodies and celebrities - P. K. Subban, Neil Patrick Harris, Katy Perry to name a few - serving the freshest sushi in Montreal at Restaurant Park. Two years since I tried his sushi, I still can't find one restaurant that can top it up. Born in Argentina, he spent most of his childhood working in his parents' laundromat. Just next door of his original restaurant, Chef Antonio Park opens Lavanderia where he shares his childhood memories and showcases the best of South-American cuisine - asado, ceviches, empanadas, chorizos, tamales, etc...

The menu consists of a mishmash of classic dishes from different regions of South America and Mexico. Once the order is made, we were offered three freshly made condiments to complement our meal - chimichurri, chimol and chipotle.
We started our meal with a simple appetizer - Queso Fundido, oyster mushrooms covered with melted queso served with freshly made corn tortillas. The cheese has a nice golden brown crust that gives the unique kick of flavour combined with the velvety texture of the oyster mushrooms. Simply delicious!


One can't go to a South American restaurant without trying out chorizos and grilled octopus. The chorizos are house-made. It comes in two flavours. The traditional is usually spiced with smoked paprika. The flavour was mildly spicy and subtle. As for the chorizo verde, it consists of spinach, coriander and cumin. These chorizos are served with a light bed of corn, crisp savoy cabbage and crema.

When growing up, Chef Antonio Park is fond of asado, the Argentinian-style of barbecuing meat over an open fire. The meats are cooked over binchotan, a Japanese charcoal. The octopus is soft not at all chewy with a noticeable smoky flavour. It is complemented with well-roasted fingerling potatoes, buttery romaine lettuce and a spicy Huancaina sauce.


Now onto the mains, we were offered a platter of side dishes - pickled veggies, guacamole without the tomato, greek salad without the feta, and coleslaw. Think of it as a South-American interpretation of banchan (반찬). Kudos to Park for this ingenious idea! 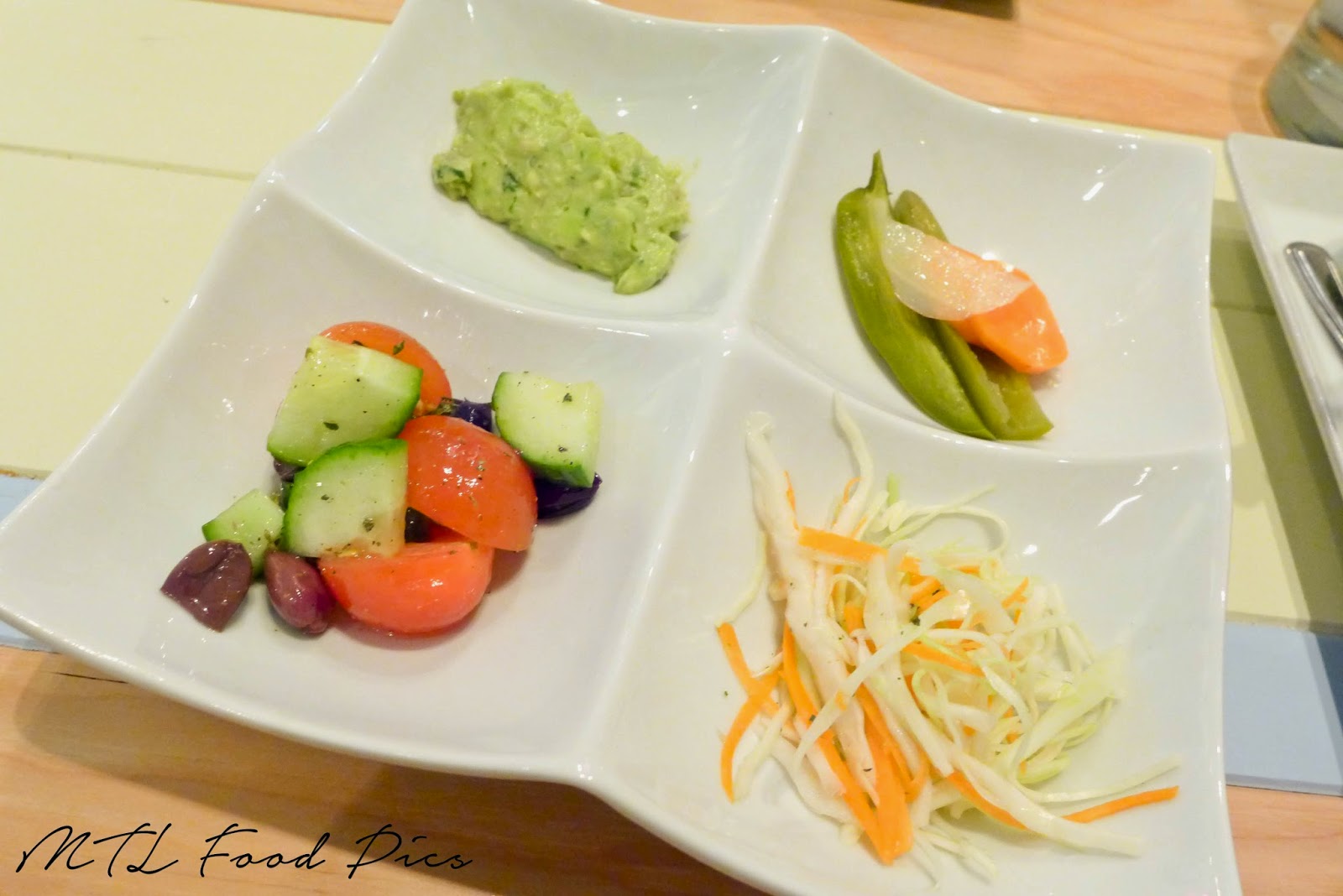 We had the tamale, a classic Mexican dish made of corn topped with slow-cooked beans and pickled onions. It is as good as the ones I had in Texas, but I felt the tamale is quite pricey, knowing it is made of inexpensive ingredients.


The simplicity of Park's food is one reason why customers keep coming back. As with his sushi where he lets the fishes shine, here at Lavanderia, he lets the meats shine. The meats are locally raised which gives its distinct taste. All they need is a bit of salt and pepper, then grilled over charcoal. We had half of the cornish hen (from Ferme des Voltigeurs) - crispy skin with a juicy flavourful flesh. The 8 oz. sirloin is worth every penny. Only Joe Beef, Toqué and Lavanderia are serving the beef from Ferme Laroche. Cooked medium rare, the taste is unique and foodgasmic. It can't be compared to anything I have eaten before.


Finally, we ended our meal with a piping hot pear almond tart served with a yogourt custard. Soft and crumbly crust with the right amount of sweetness on the filling. The creaminess of the custard melds the flavours together.


The last dessert is one of my favorite as it combines two classic desserts best associated to South America: a dulce de leche cake topped with a tres leche ice cream and fruit compote. Light, refreshing and sweet!


Almost two years since my last visit to Antonio Park's first restaurant, his food is still exceptional. Simplicity and versatility are qualities that best defines this remarkable chef. I will be visiting soon his third establishment - Jatoba, a fusion of Japanese and South-American cuisine.