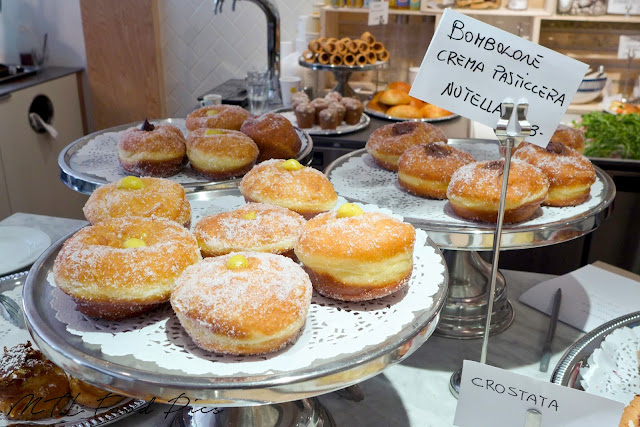 I follow many local food bloggers to uncover hidden gems and new openings in Montreal. When you see a blogger posting on their social media page food about the same location more than once a week, chances are the food is amazing. Thanks to the Montreal Food Divas; San Gennaro has become my new favourite spot to grab delicious food in Little Italy. It has a shared 50-seat terrace with its neighbouring restaurant, La Bottega which is run by the same owner.

Each time I go to a new restaurant, I always learn something new. I thought I tasted everything that I needed to know about Italian cuisine, but there are still things that I keep on discovering. This is what drives me to keep on blogging, sharing with you my latest discoveries and knowledge about food. You can read my post on Northern Italian cuisine at North & Navy in Ottawa here.

At San Gennaro, the concept of pizza al taglio intrigues me. It is popularized in Rome for serving a wide selection of rectangular pizzas sold by weight. Toppings include the use of premium and seasonal ingredients such as prosciutto, sausage, arugula, asparagus, etc. Here, each slice of pizza has a fixed price. The staffs will gladly cut the pizzas for you if you are planning to share. We were two. We went on an ordering rampage because everything looks delicious. At the end, we had four pizzas, arancini, bombolone, gelato and cannoli.

We opted for the potato topped with a paper-thin slice of taleggio cheese. Potato and cheese are a classic combination to showcase the unique flavour profile of the cheese. We also had the tomato-based pizza topped with fiddlehead ferns, mozzarella and mushrooms. Fiddlehead ferns are in season for a short period of time, I finally had a chance to try them out. The taste and texture are similar to asparagus. This pizza is simple and delicious!

Our next board consists of a pizza with Italian sausages, tomato sauce, caramelized onions and mozzarella. Simple Italian flavors in one bite. I'm always curious to try a pizza with lardon. Lardon is like bacon but 100 times better. The fact that it's very salty, it pairs well with the neutral taste of the potato. The arancini is another delicious treat. Arancini are created to make up for leftover risotto. The risotto rice is flavoured with ground veal, peas and mozzarella cheese coated with a bread crumb crust. It's crispy, oozy and great meaty flavours.


We also went wild with desserts. They offer 6 flavours of gelato. We opted for the hazelnut and sea buckthorn. Sea buckthorn berries are difficult to get a hold on, rarely you will see on menus. This is my second time encountering them. My first experience was at Erling's Variety in Ottawa when I had their sea buckthorn ice cream. Luckily, San Gennaro got a hold of a forager that sells them. These little orange berries are very, very tart. It has a distinct fruity taste that is difficult to describe unless you try. If you see them, order them immediately.

They also have pastries that are displayed near the cash register - tarts, lobster tails (sfogliatella), biscotti, etc. One pastry that I'm not at all familiar is the bombolone. Think of it like a doughnut overfilled with custard. The moment you bite onto it, all the custard will burst into your mouth. I think that's why it is called bomb-olone. They have two choices of fillings - vanilla and Nutella. We went for the vanilla custard which has a prominent vanilla flavour and the dough is nicely crisp like a zeppole.


On my second visit, I opted for the honeysuckle and peach crostada. Honeysuckle is another of these foraged ingredients that are rarely seen in restaurants. It's quite tart, it's a cross between a blueberry and raspberry. The crust has a cake-like texture, not very crumbly. It makes it easier to cut and share.

The sfogliatelle is made of thin layers of dough that give its crispy texture once baked. It is close to the texture of cooked phyllo pastry. It's filled with vanilla custard with pieces of candied orange peel. Simply delightful.


Finally, we had to try their cannoli farcie à la minute. On display are empty cannoli shells. They stuffed with a ricotta filling on order. It's an ingenious idea to prevent the dough from going soggy. I can safely say that it is the best cannoli I have eaten in Montreal! Not only the crispy hard shell delicious, but also, their creamy ricotta filling mixed with pieces of chocolate. What separates this cannoli from the rest of the pack is the addition of candied orange peel that gives a nice contrast of fragrance, freshness and fruitiness to the whole dessert.

Now that you have finished reading my review and staring at my beautiful pictures. Head over to San Gennaro and go on a spree of Italian delicacies.