I was a bit hesitant if I should write this review as honestly I didn't understand the prodigious hype of this place when I tasted the food at Blackstrap BBQ and why so many bloggers were raving about it - shame on you, bloggers. I do admit that I have a pretty good palate, I'm raised in a family where food is central to our culture and I developed recipes for nearly four years on my blog Random Cuisine as a hobby. For the first time, I was wondering if our taste buds were off that day or the world has just gone crazy. I lived in Ottawa for two months, even though not considered as a foodie destination, at least it has some pretty good Southern food such as SmoQue Shack, Union Local 613.

I'm not saying that the food was bad, just say it has some ups and downs. You have to order the right things so that you won't be disappointed. We started with Burnt Ends Brisket Poutine with gravy made out from the drippings of the brisket. The fries were crispy, the brisket ends were fatty and tender, but the gravy was quite salty, I have to tune down the saltiness with their spicy sauce which balances out well.

We ordered "Le Gros" which consists of... pretty much everything available in their menu. Our ribs were tender, smokey and flavourful. The chicken has a nice crispy skin, very tender meat that falls off the bone nicely. The beef brisket and pulled pork was good, not too dry, delicious only if sweet BBQ sauce were added. The sides were a bit of disappointment. Let's start with the Mac&Cheese balls - an original concept - but the pasta was overcooked with a cheese sauce that lacks of flavour, at least it held well together and outside nicely crisp. The collard greens were quite acidic to our taste, maybe some people likes it when it is acidic, but not for me. The beans were cooked properly but kicks in the sauce were also lacking.

Although the sides didn't wowed, the meats were nicely executed. If I were to go back, I would order their ribs and chicken. 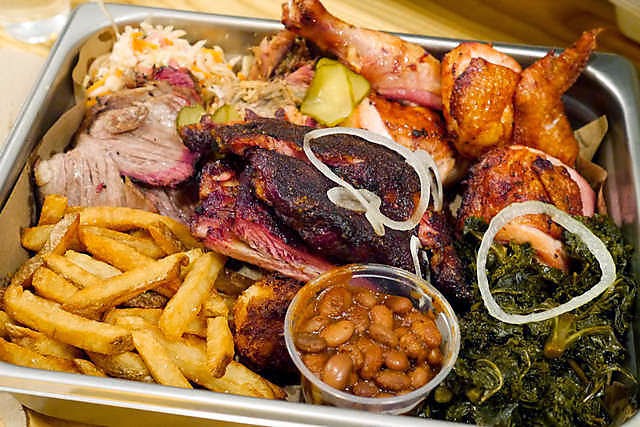