Ottawa - One thing is definitely missing in Montreal is some good Southern/Soul food. Pulled pork, saucy BBQ ribs, crispy fried chicken, cornbread, grits, and bourbon, these are the food that define Southern cuisine - simple and honest cooking. We were glad to come across Union Local 613, everything that we wanted is found in this location. I even had an opportunity to have a small chitchat with the executive chef, Christopher Lord about his culinary journey, the foodie scene in Ottawa, and some very good recommendation of restos.

The staff was courteous and welcoming. We started with something different than the classic "bread and butter", it was... peanuts simmered in salted water - simply addictive, hard to eat just one, taste just like beans. For the mains and sides, they are served in a tray, great for sharing. All the food was just delicious. The yardbird was crunchy and flavourful on the outside, and moist and juicy inside. The "grits" (consist of coarse hominy) was soft, garlicky and cheesy. The cornbread was soft with a nice hint of butter and bourbon.

The desserts are a must order, the cheesecake parfait has a good crunch, nice acidity, sweetness and slight hint of spiciness when dug through all the layers. And the buttermilk pie, perfectly made crust, nice crunch, love the sweetness of the roasted peaches. Definitely well worth our money. 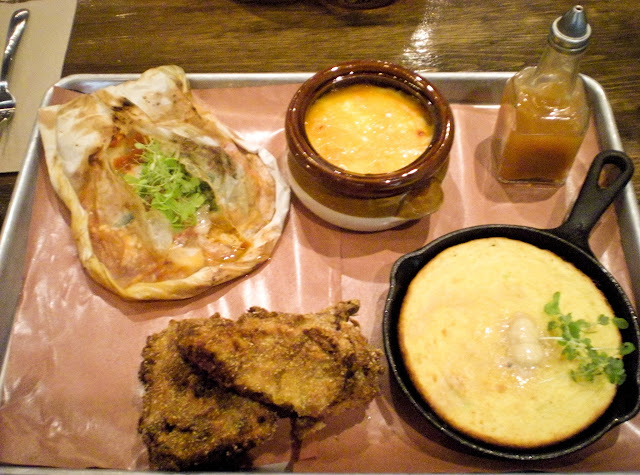 Psst... I'll let you on a little secret. There is a secret room inside Union Local 613 known as the Speakeasy. The entrance is behind a faux bookshelf. It is not at all advertised on their website. It doesn't take reservations for this room, it's a first come first serve basis.