Ottawa - SuzyQ is known for its famous gourmet doughnuts, flavour combinations that you wouldn't expect to see in a Tim Hortons or Krispy Creamy. You can find doughnuts such as Blueberry Balsamic, Root Beer Float, Raspberry White Chocolate, Strawberry Cheesecake and their famous Maple Bacon doughnuts. Even though it does sound mouthwatering, the doughnuts that we ordered was a little bit of a let-down since we weren't able to distinguish the flavours as publicized. The Maple Bacon doughnuts have a faint maple syrup taste, but the fatty taste of bacon wasn't distinguishable and the bacon was quite hard and dry. And the London Fog has a dominant vanilla taste but the earl grey wasn't present. A positive note, the doughnuts were warm and airy. I would go back to try out their other flavour combinations and see if it would change my mind. 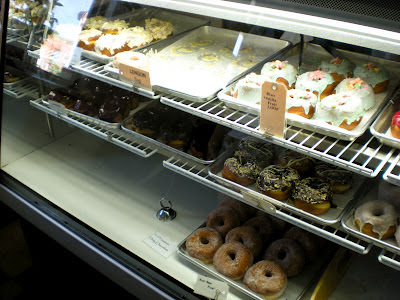