While I'm here in Ottawa for work purpose for a few months, I'm very pleased that this year's edition of La Poutine Week is not only hosted in Montreal, but also in Ottawa/Gatineau, Quebec city and Toronto. This event gives an opportunity for chefs to elevate to a new level Quebec's national dish: poutine. My criteria for the best poutine has changed substantially from last year's review of Poutine Week. You can read all about it here. Now, it is widely accepted that poutine does not necessarily require potatoes nor brown sauce. As long it has a starchy component and some sort of thickened sauce. However, squeaky cheese is a must. I wasn't sure if Ottawa/Gatineau food would be as good as in Montreal. I can say that I'm quite impressed with the creativity and love given to the making of the poutine.

Here is a detail review of each poutine. And yes, I tasted every single poutine that you see below. The only disappointment about Poutine Week in Ottawa/Gatineau was some of the participating restaurants are not easily accessible by public transport. And the second disappointment, two locations had no idea that they were part of Poutine Week, the staffs were not aware. Unlike Montreal, all the restaurants are accessible by bus and metro.

Here are my Top 2 poutines. I had a hard time choosing la crème de la crème as one has an original twist of poutine while the other stays true to the classic.

Bistro CoqLicorne poutine is the lightest and healthiest of all the poutines. It consists of 3 polenta patties, merguez sausage coated with a curry apricot sauce with a few coriander leaves. Looks simple, but a lot of complex flavours in the sauce - it's creamy, sweet and spicy. The sausage provides a nice burst of saltiness to balance the light flavour of the sauce. A bit of cilantro gives a light note of freshness to the overall dish. You know this feeling when something taste so good, you just keep on eating and eating. Well you will get the same kind of feeling here. I would highly recommend this poutine if they still serve it after the event is over. 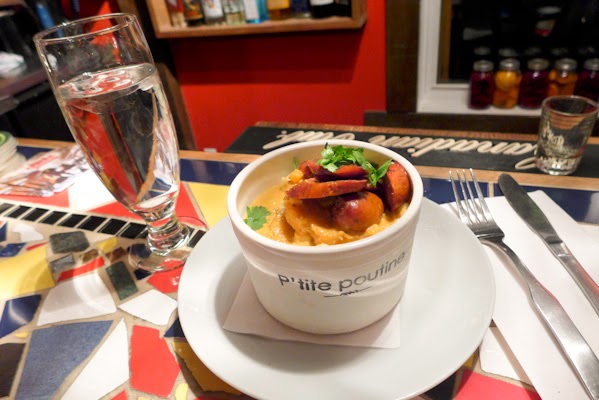 We don't have any good smokehouse in Montreal. Each time I visit Ottawa, The SmoQue Shack is a must go. The poutine is a red wine gravy topped with briskets. These briskets are moist and tender and the sauce is smokey, peppery with a nice kick of spiciness. After one bite, you just want to indulge more. Satisfaction guaranteed!

Almost made it to the Top of my List


Aperitivo is one of the furthest location from where I live as it is located in Kanata. This poutine is a take on the classic butter chicken spread on fries. The sauce is made of butter, tandoori spice and tomato sauce - flavour well-balanced, spicy and creamy. And the chicken was marinated, so on order, they remove the meat from the bones, and cook it with the sauce. The chicken pieces were tender and juicy.


I was quite impressed with the cooking of the pork tongue in Brut Cantina Sociale poutine. It has a light chew and light meaty flavour. Tongues are one of these ingredients that tend to be tough and rubbery when not cooked properly. The smoky flavour of the BBQ sauce, and the fresh and earthy taste of the blueberries give a nice addition of flavours to the overall dish. But... the sauce was a bit on the sweet side. Overall, I enjoyed it!

The poutine from Havana is quite unique. The yucca fries were something special, super crunchy outside, soft inside. You can literally hear the crunch of these yucca fries at first bite, like eating chips. The overall poutine is a harmony of flavours - moist and meaty from the roasted pork leg and gravy, tangy from the onions and a squeeze of the lime for an added hint of acidity and freshness. Sadly, there was not enough sauce to bring the ingredients together, otherwise it would have made it on the top of my list...

Finally, the "Good But Nothing Special" ones

I had high hopes for the poutine of The Foolish Chicken as whiskey is involved. The poutine consists of large cut of fries, whiskey cheese sauce, and bacon. From their description, I had the impression that the whiskey would be blended into a brown sauce, but it isn't the case. This dish feels more like a homey creamy potato gratin than an actual poutine...

Zak's diner was lacking a lot of components to be called a breakfast poutine... no egg, no bacon. It's simply a hollandaise sauce poured over hash browns and squeaky cheese.

Two Six {Ate} breakfast poutine has all the components that you would expect in an Englsh Breakfast. The bacon and tomatoes were served in large chunks, so it was a bit of challenge to grab a bit of everything with a fork. The letdown was the egg served cold. The eggs were prepared in advance instead of cooking them on order. At least, the egg yolk was runny.

Finally the last poutine to review, I do not have much to say about Gainsbourg's poutine, it tasted like a normal poutine, but topped with slices of steak. It is not as elaborated as the Pepper Jack steak poutine from Les Brasseurs du Temps.

Great valiant effort to all the participating restaurants and poutine eaters! Be sure to prepare yourself for Burger Week 2014 in September.